The Pulse of the City- Harry Anderson: The Magnificent Captain of the Lakes 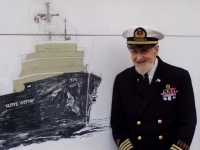 Captain Anderson by his garage door mural of the Cliffs Victory, painted by his own hand. Photo by Gary Rice
View Image Gallery
Of all the human beings who walk the earth, the captain is one of those most respected, admired... and even feared. Whether running a ship, an aircraft, or some other conveyance, the captain is the man (or these days, woman!) whose very word is law.

In the old days, a ship's captain could put you in irons, throw you into the brig, or keelhaul you... or maybe even make you walk the plank. On the high seas, a captain could marry you, bury you, or carry you to the next port of call.

If you had to choose between keelhauling and the plank, by the way, you'd want to go with the plank! To "keelhaul" might mean tying your arms and legs to opposite sides of the ship: portside (left) and starboard (right). Then, you were pushed off the bow, and your body dragged along under the keel (bottom brace) of the ship until it reached the ship's stern (back). Kind of like getting a backrub, huh?

Once at sea, or in the air, a captain has the ultimate responsibility for the safe passage of his conveyance. He, or she, may have to make hundreds of decisions daily, any one of which could cost the lives of passengers and crewpeople.

This week's story is about a magnificent Captain of the Lakes: Lakewood's own Harry Anderson. Captain Harry turned 97 years young on October 5th, 2006. By the time this column hits the street, he' ll be well on his way to even more adventures. He still goes up to Detroit for the Edmund Fitzgerald's annual services held at the Mariners' Church in November to remember those lost on the lakes.

A former Cleveland Cliffs Captain, Harry has been Master of a number of their ore-carrying ships, including the Cliffs Victory, the Cadillac, the Frontenac, the LaSalle, the Pontiac, the Walter A. Sterling, the Edward B.Greene and the William G. Mather. He was forced to retire in 1974, when he reached the (then) mandatory retirement age of 65.

Captain Harry continues to volunteer his time on the Mather's decks, now that the ship is a dockside museum, berthed by the Science Center near East 9th Street downtown. Children love to visit with the distinguished sea captain with the white beard, and his impeccable Cleveland Cliffs uniform that he wore on the Cliffs Victory in 1969.

Known as "Heavy Weather Harry," a supervisor once discovered with amazement that Captain Harry had never "went to anchor" on a trip. This phrase meant to stop the ship for weather conditions. The Captain told me that by keeping a careful eye on conditions, he was always able to circumvent the worst of storms without stopping by making careful corrections as he sailed along.

Still, the seas could get rough at times. Although ships' hulls are generally welded these days, the Captain likes to tell about rivets coming loose around the ship's hull during storms. For temporary waterbottom repairs while at sea, in the old days before World War II, crews might even put a slab of bacon (rind side up) over the hole, and wedge it with boards up against the leak!

As far as food went, the cuisine served on the Cleveland Cliffs ships was legendary. Several of the flagships, like the William G. Mather, even had their own "guests' dining rooms," finished in elegant wood with beautiful china. Lake crews enjoyed hearty food, available at virtually every meal, including lunches for sailors coming on duty at the midnight and 4 a.m. watch times.

Captain Harry started his love of sailing at the age of 10, when he came to America from his native Sweden. His family members were third class (steerage) passengers, normally confined to lower deckrooms at the rear of the ship and without portholes. As a talented singer, however, the future captain began to sing for his fellow passengers. Before long, the youngster had sung for the second class, and then the first class passengers, before making his way to the bridge for an audience with the ship's captain! The youngster's pockets jingled with donations from passengers of many lands by the time the ship arrived in America!

As well, even then, the lad knew that he wanted to pilot a ship one day. Before leaving Sweden, he had visited a dockside ship where a kindly captain showed the lad around. The captain of Harry's Trans-Atlantic ship was amazed at the boy's knowledge by the time he met the young singing steerage passenger on the bridge.

Born in 1909, Harry came to this country in 1919, after the First World War. Not long afterwards, he was on the seas. Harry worked his way through the ranks, finally becoming a captain for the first time in 1963.

Over the course of his long career at sea, Captain Harry would sometimes work the warmer open seas during the winter months, and return to the lakes in the summertime. His favorite trip was on the "Round The World" cruise on the Dollar Line's SS President Harrison. Some of his many ports-of-call over the years included Shanghai, Yokohama, Kobe, Manilla, Hong Kong, Calcutta, Singapore, and Antwerp, among others.

During World War II, Captain Harry served as a Second Mate with the United States Merchant Marine taking Liberty Ships (small freighters) across the Atlantic with supplies for the war effort. Danger from German aircraft and U-Boat submarines was always present, but his ships arrived safely every time to their destination.

As befits a man on daily terms with the elements, Captain Harry is a man of great faith. He reverently wears the Mariner Church's Cross and Anchor as a reminder of his Creator and his need to rely on the higher powers of divinity as much as he did on the many instruments of science on the ship's bridge.

He attributes his long life to a moderate lifestyle. He gave up smoking long ago. He seems to enjoy meeting new people, and learning new things each day. He is a regular user of the internet, as well.

Captain Harry lives with his lovely wife, Louise, and their beautiful cats. They enjoy several children and grandchildren, as well as their many friends around the world.

Perhaps ironically, it is on the bottom of the last page of his discharge book that the last entry of his professional career is made; this being the notation of his retirement. "A very sad day" are the words expressed.

Perhaps so, but Lakewood's Magnificent Captain of the Lakes has done so much since his retirement to brighten the smiles of generations of children and adults, teaching them about the thrills of loose rivets, bacon grease, and sublime bravery before the wind and over the waves of the rolling seas.

Sail on, Captain! Lakewood is honored by your presence!


Read More on Pulse of the City