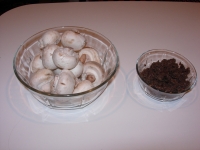 Duxelle: Before and After
Addition by subtraction. These are mutually exclusive terms, yet it is a statement that we hear frequently, generally in relation to a fall Cleveland sports team that finds it necessary to release non-productive players. Taken literally, this contradiction defies logic. How can we increase something by subtracting from it? But, we also know that sometimes the removal of an element increases the value of that which remains. In the sports arena, the removal of a disgruntled and disruptive player may reduce the number of personnel on the roster, but may well increase the harmony and performance of the team as a whole. There has, thus, been an increase in quality by virtue of a decrease in quantity.

The same holds true in our culinary endeavors. Virtually any recipe for soup or sauce asks the cook to “simmer the liquid until it is reduced by half.” By following these directions, we are “adding” by way of concentrating flavors through reduction (due to the evaporation of water). Sometimes those instructions are abbreviated with the simple direction to “reduce the liquid by half.” To clarify, such a reduction is to be accomplished by boiling or simmering until the concentrated remainder is half the volume of the original (beginner and novice cooks: do not pour half of the liquid into the sink). The water content being eliminated dilutes the flavors as well as the consistency of the preparation.

In virtually all foods, water is a significant portion of the mass. Thus, as we dry jerky, fruits, and vegetables, we not only reduce their water weight significantly, but we also concentrate the flavors. So, even though the statement “addition by subtraction” would seem counterintuitive, it is nevertheless a truism as we add flavor and consistency by subtracting water or other liquids.

There is a preparation of mushrooms known as Mushroom Duxelle which is the epitome of addition through subtraction. Mushrooms of all types are, of course, fungi and, as such, they soak up and retain liquid like a sponge. The proper removal of this liquid can cause a dramatic increase in the otherwise mild taste of a given fungus. In addition, we can also change the state and texture of the mushrooms through this technique, converting the fungi into a coarse paste. This final product has many uses, including but not limited to, as an addition to sauces, a thickening agent for soups, a simple spread as a base for a bruschetta, or as a substitute for foie gras in the classic preparation of Beef Wellington.

The amount of the resulting end product represents a dramatic decrease from the initial mass. An initial pound of mushrooms (two or more cups, chopped and sliced) will result in perhaps four ounces (a scant half-cup) of mushroom duxelle, but, with the intense increase in flavor, much less is needed. Some cookbooks and recipes advise that, when making mushroom duxelle, the mushrooms should be finely chopped, mounded in a cloth, and wrung until the all of the water is squeezed out. Then, the resulting pulp is sautéed with a bit of minced onion and salt and pepper until the remaining moisture has evaporated. While this certainly represents one way to subtract from the original mass, it is much the same as the novice cook who reduces the stock by throwing half down the sink because with the squeezed out water also goes much of the flavors.

Thus, although it may take a bit a longer, my preferred method to prepare the duxelle is to, after washing and cleaning, finely chop the mushrooms and sauté them in a tablespoon of extra virgin olive oil with a teaspoon of finely grated onion over medium heat. After three or four minutes, the mushrooms will begin to release their moisture until there is a thick soup-like substance. Cooking this uncovered will eventually reduce the liquid, leaving behind the flavors that the water contained and resulting in the stiff, paste-like duxelle. To add additional complexities of favor, a bit of sherry or other wine can be added as desired. Once prepared, the duxelle can be refrigerated for up to a week or frozen for months at a time ready to be used as a flavoring agent in sauces, soups, or simply tossed with pasta and olive oil.

Because there is such a vast array of mushrooms readily available, the flavors that one can create using this basic recipe are quite varied. Your standard white, button mushroom is milder than most and the resulting duxelle product will likewise be somewhat milder than other varieties. Crimini mushrooms, Portobello mushrooms, and even “exotics” such as Shiitake, Oyster, or Lobster will each impart their own unique flavor to the end product (although, frankly, with the cost of some of the more exotic mushrooms, you may not wish to see them reduced to a paste, but would rather that there were whole slices appearing in your soup or sauce). The preparation process is so simple and, beyond the amount of time necessary to cook away the liquid, is not affected by the quantity being prepared. In my opinion, as long as you are going to make it, make a lot. I have found that it can be a wonderful starting point for any hors d’oeuvre (it’s a great cracker topping!). It is also wonderful on sandwiches when used in the place of mayonnaise, mustard, or other standard condiments.
Read More on Chef Geoff