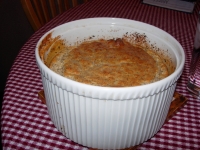 A Mushroom Souffle
We have all heard the egg council’s refrain of “the incredible edible egg.” Indeed, the egg is an interesting food item. In addition to the standard fried, scrambled, and hard-boiled preparations, this culinary staple can provide other unique cooking opportunities.

As every shopper knows, eggs come in a variety of colors and sizes - from white to blue to brown and from small to extra large. But, once the shells are cracked, these eggs share the same characteristics. There are two components to an egg: the egg yolk (the primary source of cholesterol in eggs) and the egg white (which is 75% water, but also contains protein). Normally, we don’t think about these two component parts separately - the recipe says “add an egg” and in goes the yolk and the white. As a side note, because the volume of an egg can differ depending on the size, when a recipe calls for an “egg,” the standard to which it is referring is an extra large egg.

However, by separating the parts of an egg, one can cook special recipes. Egg white, in its unaltered state, is not particularly appealing, but something unique happens when air is added. Using a mixer or a hand whisk, the egg white can be transformed into a substance that looks like whipped cream. Whipped egg whites can serve as the base either for meringue (created by adding sugar) or for one of my favorite dishes - soufflé.

Soufflé mirrors the versatility of the egg and, depending what items are added to it, can be a side dish, an entrée, or a dessert. The contrast in texture of a light, fluffy soufflé with rich chocolate or tangy aged cheese is a delight for the palate. The magic of a soufflé stems from the addition of that secret ingredient - air. In the course of whipping the egg whites, air is encapsulated in the mixture and, when placed in the oven, causes the soufflé to rise significantly (sometimes even double in height) which makes for a spectacular appearance and provides that classic light texture. Any soufflé recipe is a bit more complicated than simple scrambled eggs, but the added time and effort is worth it when the end result is removed from the oven.

When preparing the soufflé, there are several important things to remember. First of all, fresh eggs respond far better than eggs which have been left in the refrigerator for a few weeks. Next, when separating the eggs, make sure that the bowl for the whites is meticulously clean and dry (also, do not allow any yolk to find its way into the whites). If you happen to be lucky enough to own a cooper bowl, there is an interesting chemical reaction which occurs between the cooper and egg whites which further enhances the addition of air. Also, eggs freshly removed from the refrigerator will respond better than eggs at room temperature. And, finally, the whipped egg whites should not be left to sit before proceeding further as they can begin to collapse.

Any ingredient which is to be added to the soufflé, whether it be meat, vegetable, or cheese, must be minced very finely so that the weight of that addition does not hinder the rise of the soufflé. Furthermore, it is important to provide the soufflé with a surface which allows it to climb, like a buttered soufflé dish or ramekin coated in breadcrumbs.

The hardest part of making soufflé is separating the yolks. There are two ways one can attempt this task. You can employ the use of a device (which works quite well) that looks like a measuring cup with slots at the bottom. Or, you can hold the yolk in one half of the cracked shell while the white runs into a bowl beneath it. To avoid contaminating the white with any element of the yolk, it is recommended that separation occur over a different bowl than the one intended for the whites (and then added to the appropriate bowl after separation). Once the eggs have been separated, the whites should be refrigerated and the flavors for the soufflé prepared.

First, melt the butter and whisk in the flour to make a roux, and then add the milk or cream to make a simple white sauce. Whisk each yolk into this white sauce and then fold in the selected ingredients. Once this mixture is cooled, the egg whites can be whipped to fluffy, soft peaks and folded into the yolk mixture. Folding should be done gently so as to keep the whites as aerated as possible. Once the two mixtures have been completely blended, add the product to the soufflé dish and put it in the oven immediately. The soufflé dish should have at least two inches to grow (for a six-cup dish), so that, as the mixture rises, it does not run over the edges. It is best not to check on the soufflé too often because there is some truth to the rumor that a slammed oven door will cause it to fall.

In the heat of summer, we like to stay out of the kitchen as much as possible, but if you are willing to bear the heat of your oven for an hour, a soufflé can be a light and satisfying main dish, especially accompanied by a cool salad of mixed greens and a glass of wine.

Preheat oven to 375 degrees. Melt butter in pan; when it bubbles, whisk in flour. Over low heat, gradually blend in milk. Continue to stir until it begins to thicken. Remove from heat and whisk in yolks, one at a time. Transfer to a large bowl and allow to cool. Adjust seasoning. Beat the whites until stiff. Fold the whites into the yolk mixture, combining gently. Pour into prepared dish and immediately (gently) place in preheated oven. Bake 20-25 minutes for a solid center and a fully risen, golden brown (my preference). Additional ingredients, such as finely grated cheese, diced ham, or chopped veggies can be added to the yolk mixture and mixed in fully before adding the egg whites.
Read More on Chef Geoff