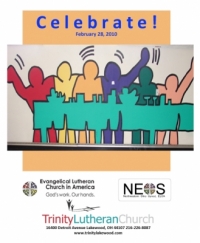 A festival service was held at Trinity Lutheran Church of Lakewood on February 28th, illuminating the Lenten season with a celebration of last summer’s vote of the Churchwide Assembly of the Evangelical Lutheran Church in America to allow the ordination of partnered gay or lesbian clergy. The Reverend Bishop Elizabeth Eaton of the Northeastern Ohio Synod preached to members of several local Lutheran, Unitarian Universalist, and United Church of Christ congregations and guests from Lutheran Metropolitan Ministries, Lutheran Chaplaincy, and Dennis Kucinich’s office. Pastor Paula Maeder Connor of Trinity had chosen texts about Ruth’s steadfast love for her mother-in-law Naomi in spite of the social liabilities of such loyalty (Ruth 1: 8-19), Christ’s call to us to resist slavery (Galations 5:1), and Jesus’ relaying His Father’s commandment that we love one another (John 15:9-17). Bishop Eaton thanked the GLBT people and their friends and families who had patiently endured their second-class status within the church for so long. She also expressed a hope that the rocky reception of this vote across the country will resolve into positive innovation in the church. During the prayers, one of the parishioners thanked God for giving us the gift of love in all of its many shapes and forms. Joyful music was given by Trinity’s choir, soloist Brenna Connor, and organist Dave Debick of the Brecksville United Church of Christ.

Trinity Lakewood and Hope Lutheran are the only two Northeastern Ohio ELCA congregations to have become “Reconciling in Christ” congregations, meaning that they welcome all people, regardless of sexual orientation, race, gender, age, ability, or other identifications.