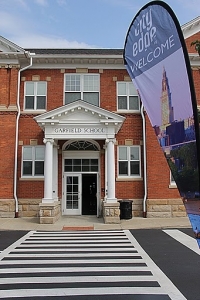 City Edge gathers every Sunday Morning at 10:30am in Garfield Middle School, holding public worship services that present timeless truths in relevant and accessible ways that can be applied to everyone's life. The church also hosts an age appropriate children program called City Kids during the adult gatherings.

Throughout the week, the church hosts small group gatherings called City Groups. City Groups consist of 12-25 people who live in the same community, meet at each other's homes and venture out into the city to serve others with the love of Jesus. City Groups are safe places to join others in searching for answers to life’s tough questions. The groups eat, hang out, and look at what the bible has to say about life, ever mindful of finding new ways to bless and serve others in their neighborhoods.

Kevin Rush, Lead Minister of City Edge, used the church's first month to present a sermon series on the vision of City Edge called "Love Beyond Reason." The audio and videos used from these teachings can be found on their website at www.cityedge.org. During the month of October City Edge will launch a new series called "I Believe in Monsters." This series will investigate classic Halloween Monsters, attempting to prove that they do, in fact, exist. Cue the creepy music and join City Edge as they tangle with some of the most terrifying monsters ever!

City Edge Worship Gatherings are held on Sundays at 10:30a at Garfield Middle School, 13114 Detroit Ave. Lakewood, OH. If you have questions about City Edge check out www.cityedge.org or call 216-236-3970.

Kevin is the Lead Minister and Planter of City Edge Christian Church. He has an amazing wife, two daughters (with a third child on the way), and loves living in Lakewood.