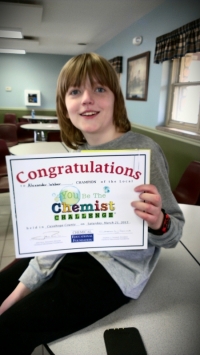 Lakewood 7th grader Alex Weber won in the regional competition of the “You be the Chemist Challenge”.

Seventh grader Alex Weber will compete for the state title in the national “You be the Chemist Challenge”. Weber won the regional competition last week in Avon, Ohio. He is one of four regional finalists who will compete April 18 in Toledo for the State title. National Competition in Philadelphia is scheduled in June. Grand prize is a $10,000 cash reward.

Alex Weber is a student at Menlo Park Academy. Students all over northeast, Ohio competed in their schools for the qualifying first round in the “You be the Chemist Challenge”. Classmate Clement Liu, an 8th grader from Solon will also advance to the State Championship. Alexander Masgras from Menlo is first alternate.

Hosts and judges from Palmer-Holland Chemicals commented that competition was particularly advanced this year. More elimination rounds were needed this year than any previous year. All competitors from Menlo Park Academy advanced to at least the next to final round. Camaraderie and team spirit made the event fun for all participants and spectators along with hands-on chemistry demonstrations in between every competitive round.

The annual competition is sponsored by Palmer-Holland Chemicals and the Chemical Education Foundation.

Erin Weber is a Lakewood Mom and a longtime Voice Over Artist and photographer. After traveling the world as a radio DJ, she chose the best city in America to continue her adventures with her husband and two super-fun boys.