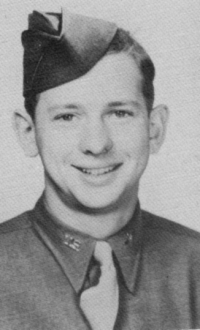 The Lakewood Historical Society is presenting a series of articles to honor our WWII veterans showcased in the exhibit Lakewood on the Homefront, now on display at the Oldest Stone House. Here we tell the story of a veteran who served with distinction, and later became active in the preservation of his much loved hometown’s history.

Wayne B. Cahoon, Jr. was born and raised in Lakewood. He grew up on Cove Ave. and attended the Lakewood Schools. Upon his graduation from Lakewood High School, in 1943, he applied and was accepted to the B-29 Bombardier Training School in the Army Air Corps. By the end of his training, his rank had risen to Lieutenant, and he was assigned to serve in the South Pacific on Tinian Island at its large air base.  From 1944 – 1945, Wayne participated in 13 bombing missions over Japan. When returning from a bombing mission, his B-29 Bomber was crippled over Japan and forced to ditch in the ocean, 80 miles off the coast of Japan. Most of the crew survived, but were wounded and afloat in a rubber life raft when they were picked up by a U.S. submarine. He later was on Tinian when he saw the infamous bomber, Enola Gay, land on the island on its way to its fateful bombing of Japan. After the surrender of Japan he went on to fly cover over Tokyo Bay during the peace signing and flew a mercy mission to drop supplies to POW’s in Japan. Wayne was awarded the Purple Heart and the Air Medal for his service.

After the war, Wayne returned to Lakewood and had a long career with the Cleveland Transit Authority (now RTA). After his retirement, he became a dedicated Lakewood Historical Society volunteer. With his interests in photography and Lakewood history, Wayne was a perfect fit as the society’s Photo File Chairman. Many of the historic Lakewood photos you see and enjoy in publications and online are the result of his many volunteer hours spent identifying, organizing, and producing hundreds of photos for the society’s collection. He was an expert on the history of Lakewood streetcars and trains and presented many programs on the subject for the society.

Wayne often spoke of his service in WWII, of which he was humbly very proud.  When he passed away last year, his wife of 64 years, Vivienne, donated his WWII items and papers to the society for preservation, along with many Lakewood photo images. The society will miss our wonderful friend Wayne, but the community will continue to benefit greatly from Wayne’s service, not only to his country but also from his work in preserving the city's history.

If you would like to view some of Wayne’s WWII items, come to the Oldest Stone House to see the exhibit Lakewood on the Homefront. You can get a glimpse of what life was like for Lakewood citizens during the war; see posters, photographs, newspapers, fashion from the 1940s, uniforms and more. Museum hours are Wednesdays, 1p.m. – 4p.m. and Sundays, 2p.m. – 5p.m. Admission is free!

The Lakewood Historical Society collects, preserves and interprets the history of Lakewood. Call the office at 216-221-7343 if you are interested in volunteer opportunities in the preserving our local history.

Curator at the Lakewood Historical Society