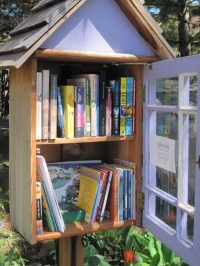 Little Free Libraries have spread to at least nine locations in Lakewood, and tens of thousands more, worldwide. It seems that awareness of these micro-libraries is still catching up, though.

When a friend of Dr. John Mumma mentioned seeing him outside by his postbox one day, while passing Mumma’s home on Hilliard, the doctor immediately recognized the error. “I said ‘that’s not a postbox,’” he recalls as an example of the ongoing task of explaining a Little Free Library. “Some people are incredulous” at the concept, he adds.

The concept of the Little Free Library (LFL) is ultimately simple: a small public shelter, where people borrow or donate books, for free. Yet it’s a surprisingly recent idea. Todd Bol built the original Little Free Library in Wisconsin just eight years ago. Noelle Champagne and her husband installed the first in Lakewood, outside their home on Parkway, a few years later. But a majority of the local LFLs have arrived within the past 18 months.

Little Free Libraries can be easy to overlook, perhaps especially in Lakewood. The Kenny family installed theirs on Elbur more than three years ago, but like most LFLs it’s a modest wood structure with a shingled roof. In a city like ours, with substantial variety among the housing stock, the typical Little Free Library blends in well even without trying.

Despite this, not one of Lakewood’s Little Free Libraries is neglected, according to owners. Even the new library on Cliffdale—brought to Lakewood from its old home in Seattle about one month ago—has local patrons. “Our best customer is John next door who is four,” says one of its owners. “He comes just about every day.”

Many of the local Little Free Libraries appear to be popular with children. Garfield Middle School has one of its own, and Garfield students also take great interest in Tony Neuhoff’s library, south of the school on Grace. Dr. Mumma says that students at Harding are a significant audience for his library.

The libraries have plenty of adult fans, also. Champagne says that over the years a number of people have driven specifically to check out her Parkway library, one of two in Lakewood listed at littlefreelibrary.org. North Coast Health set up the other one, outside of its offices on Detroit, in hopes of stimulating curiosity about them and the services they provide. “It has actually done that” very effectively, says Mary Ludwig.

Most of Lakewood’s Little Free Libraries, though, are unlisted and operated solely as hobbies. Nearly all have some sort of family connection; someone may have been first exposed to a Little Free Library through a relative who owns or lives near one, and nearly every LFL in Lakewood was built by or with a close family member.

The library on Lincoln appears to summarize most of the movement’s themes of family, volunteerism and person-to-person networks. The owner’s daughter in Maryland owns a Little Free Library too, and her son lives on the same street as one in Lakewood. She says that he “was good enough to surprise me with one” of her own last Christmas, which he built himself.

Though very close to the Parkway library, Lincoln’s has already found its own community, too. The owner says that while she had no children’s books for her library at first, users have supplied the need by themselves; “Now I have quite a few and I don’t know where they have come from.”

13455 Parkway
Probably the city’s oldest; its owners are moving soon but the library will remain with their home’s new occupants

Most recent question: Top 3 Decorated Homes For 2021(You Must Pick 3)
Submit your answer and read others' answers