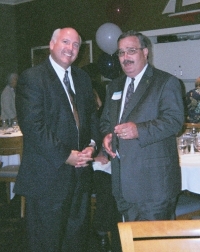 “I am deeply saddened to hear of the passing of my former Lakewood City Council colleague Tom George and send my deepest condolences to his wife Jane, children Meghan and Tim and all who knew and loved him.”

“Mayor George will be known as a compassionate leader and public servant. A graduate of Lakewood High School, Tom served as Lakewood’s Mayor for four years and as a member of City Council for sixteen years. In those capacities, Tom was an advocate for seniors and families and worked to protect the city’s commitment to strong human services programs. Tom George faced the challenges of older inner ring suburbs by promoting small businesses, economic development, neighborhood safety, and preservation of an aging housing stock.”

“His compassion for Lakewood led Tom to advocate for struggling cities at the state level by serving on the board of the Ohio Municipal League. His public service also extended to ensuring that our elections were conducted with integrity by serving as an administrator with the Cuyahoga County Board of Elections. Tom was a dedicated Democratic, having served on the central and executive committees of the Cuyahoga County Democratic Party.”

“As a public servant, Tom George fought tirelessly for others. He loved Lakewood and he will be greatly missed.”