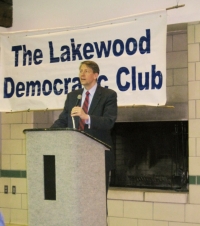 Richard Cordray has served as Ohio Treasurer and Attorney General, and director of the Consumer Financial Protection Bureau.

A capacity crowd of well over 100 attended the Lakewood Democratic Club's March meeting, to hear from candidates for governor Richard Cordray and Dennis Kucinich. Both took questions from the audience after opening remarks, as did candidates for Ohio House and Senate. Topics ranged from gun safety to public schools to single-payer healthcare.

The club expects to host a third candidate for governor, Bill O'Neill, at its next meeting on April 26. State senator Joe Schiavoni, also running for governor, addressed the January meeting.