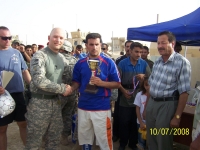 Lakewood native Eric Smith has been serving in Iraq since May. Major Smith is stationed at Camp Victory, near Kirkuk, Sadaam Hussein’s former home town.

Last week we were reminded that Iraq remains a very dangerous place when one of our vehicles was hit by an IED (Improvised Explosive Device). An unknown insurgent buried some type of explosive along the side of a road and when one of our vehicles drove by, he detonated it. Fortunately, the vehicle was an MRAP (Mine Resistant Ambush Protected, pronounced em-rap). The MRAP is extremely popular with the Soldiers and we have had numerous cases of Soldiers choosing MRAPs over other vehicles when they are assigned missions outside the wire. It’s fully armored and designed to withstand blasts from mines and IEDs.In this instance, the Soldiers inside bailed out of the truck. No one was hurt. Chips and divots in the MRAP’s steel armor on the side of the blast attested to the lethality of the IED, and had it been another type of vehicle, we would have suffered casualties.

As it was, we loaded the MRAP onto a trailer and brought it back to the FOB (Forward Operating Base) to present to our sad-faced mechanics. IEDs remain the single greatest hazard in Iraq and the lethal competition between us and the insurgents for freedom to move on the roads resembles the Spy vs. Spy comic strip in Mad Magazine. In our area, we have had a dramatic decline in both the numbers and lethality of IED strikes.

Nevertheless, one IED is one too many, and in this case, we were fortunate. For those of us who labor under the misconception that life in Iraq revolves around skimming the desert surface in helicopters and scanning distant hillsides with binoculars for insurgent caches, we were humbled when our LAD failed. The LAD (Laundry and Dryer system) is a giant machine that washes our clothes. It has two washer/ driers on a trailer, is controlled by a computer, and can wash over 100 loads at a time. The crew that operates it only works at night to prevent the drying cycle from overheating, and in some ways, our weekly life revolves around dropping off and picking up our laundry. That’s why we all immediately spun into crisis mode when the LAD broke down.

If you’ve lived in close proximity to 800 other people who work 18 hours a day in 115 degree heat, you know that by dinner time, we all smell ripe. A steady rotation of clean clothes helps us get along with each other. So when the LAD coughed, sputtered, and stopped working, it was a major crisis. My commander sent me an urgent e-mail to the effect of, “We need the LAD to work. Get it up and running in 24 hours.”

Armed with my priorities, I made a beeline for the LAD to assess the situation. Soldiers dripping in sweat, motor oil, and spent detergent were crawling all over it like ants yelling things to each other. “Are you sure the hose is tight?” and “Blow out the fuel filter and try it again,” and “I’m still not getting any power! Try it again.” My senior maintenance officer was exasperated. He knew a lot about fixing wheeled vehicles, but this was outside his expertise. He assured me they would work all night, but the prognosis was grim. It was time to ask for help. After a few phone calls, I found out that the nearest replacement LAD was in Mosul and could come down on a convoy within three days. Sadly, this LAD was broken as well, so we would have to depend on our mechanics to combine the two machines and come up with one that could save us from the inevitable increase in foul odor.

As unpalatable as it was, it was our only option, so we started tracking the convoy’s every move as it navigated the roadways down from Mosul. Three days later it pulled into the FOB and the crew was swarming all over it before the airbrakes were engaged. They replaced the generator, charged the air cylinders, threw salt over their left shoulder, and hoped for the best. After two hours I received an excited phone call, “The LAD is working! They’re washing clothes now!”

When I arrived at the giant trailer, swaying and thumping as it washed a test load, the senior operator met me and started talking like Scotty on an old episode of Star Trek. “We rewired the bypass cut-off valve and adjusted the pressure sensor. I don’t know how much longer she’ll hold together, but she’s working now!” I went back to my room to get my laundry bag. Life within the district surrounding our base is returning to some semblance of normalcy. Shops are opening amid the shuttered storefronts, roads are being repaved, children are attending school, and people can simply move around and do the things they want to do without fearing for their lives. (The District Chief of Police told us that he has two eight-year old sons whom he had not let leave the house for four years, until last week when he took his whole family shopping downtown and ate dinner at a restaurant.)

We want to emphasize the return to normalcy, to show people that the insurgency doesn’t offer anything, and that by working together with the government and the Americans their lives will improve. Sports can symbolize that normalcy. A few months ago, we Americans started playing soccer against each village’s home team. The games have been a raging success and every mayor in our area clamors for the next one to be in his village. For the Iraqis, they get to play soccer (which they are very good at) against the Americans (who are not very good). Our players don’t wear body armor or carry weapons, so they look like normal people when on the field.

In addition to being very popular with the people, the games send a strong message to the insurgents that their attempt to disrupt daily life is failing, and failing so miserably that the Americans are willing to play games in shorts and a t-shirt in what used to be their backyard. Last week , we drove across the sector to the small village of Zaab. When we arrived, our team began to warm up while the Zaab village team, bedecked in soccer jerseys and shin guards, started running complex drills.

I sat down under a tent with the Mayor and the local sheiks while the game commenced. As expected, we were thrashed. We scored our first goal in the second half, after their eight in the first. I didn’t have much time to watch the game, however, as this was an opportunity for me to talk to the local politicians about the condition of their villages and for the local politicians to ask me for favors. One mayor was concerned that a local insurgent group, Naqshabandi, was distributing propaganda at night and becoming more active. One sheik wanted my assistance in increasing the size of his security force by fifty men while another wanted me to provide him with pickup trucks. There was a dispute between some local men and the Iraqi Army about who should guard a bridge and a city council member wanted some assistance with getting paint so he could start a small-scale urban renewal project. Some of the requests were outlandish and some were legitimate. I was polite and I wrote down their concerns so I could send them to the appropriate people, but made no promises.

By the end of the match it was clear that the local team’s superior skill and acclimatization to the heat had bested our Soldiers. We held a brief ceremony to pass out trophies and t-shirts to all the players. As we were putting our kit back on and getting ready to leave, the Mayor turned to me and said, “You know, everyone in Iraq is hearing about our soccer games and they are all jealous. We are the only ones who get to do it.” “Playing soccer is better than patrolling.” I answered, “I can’t wait till the next game."

Major Eric Smith is serving in Iraq with the 10th Mountain Division. The division’s home base is Ft. Drum in Watertown, New York where Major Smith lives with his wife Dina, three year old twins Kirsten and Skyler, and eight month old son Neil. The son of Pam and Tom Smith of Lakewood, Major Smith graduated from Lakewood High School in 1990 and was commissioned into the US Army after graduation from Dickinson College in Carlisle, PA. MRAP (Mine Resistant Ambush Protected) vehicle, pronounced “em-rap” Eric awards the winning trophy to the Iraqi team captain.

Read More on Notes From Iraq