This Lakewood Resident Is Letting It All Hang Out 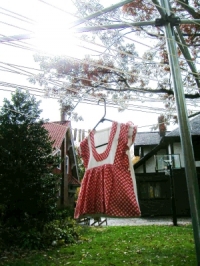 If you knew about a simple activity that would save money, energy, was environmentally friendly, and allowed you to get a little exercise in the fresh air and sunshine to boot, would you try it?

Katie Stadler has been doing just that since she first began doing her own laundry. She grew up watching her mother and grandmother line drying, so it was second nature for her. She says she never even considered NOT using a clothesline!

“There’s nothing like the smell of fresh towels and sheets that just came off the line-that smell cannot be replicated in a dryer sheet!” Katie insists.

In her early years of establishing a household, she used a clothesline for economic reasons, but has discovered that what is good for her wallet is often good for the environment, too. She uses the money she saves by not using her dryer to justify purchasing environmentally responsible laundry products. She also saves money and helps the environment by using cloth napkins and dish towels instead of their paper versions.

Katie believes that she is not unique in her use of a clothesline, at least among her circle of friends. She has not received negative feedback, but rather has had passersby inquire where she purchased her “umbrella type” clothesline.

Katie is also an advocate of organic gardening, backyard habitats and green spaces. She helped transform the small plot of land at Trinity Lutheran Church into an organic vegetable garden, which is used to serve community meals there. In this, their first year, they harvested over 1,000 pounds of produce that supplemented 15 community meals.

Katie is the kind of person you immediately like when meeting and we are fortunate to have her in our city. We are also fortunate that Lakewood has never banned clotheslines. Katie believes that it’s the kind of thing that distinguishes Lakewood from newer developments in outer-ring suburbs. She hopes that visible signs of environmental consciousness, such as clotheslines and rain barrels, will not only be tolerated by the administration and community as a whole, but encouraged. She sees them as visible signs indicative of a progressive, environmentally concerned community.

So, how do you get great-smelling laundry and save some green while being green?  The answer my friend, is…

For more information on line drying, including the top ten reasons to make the switch, visit laundrylist.org