Lakewood's Antiques... The Holy Grail...Drum? "As the Father sent Me, so do I send thee..." Jesus 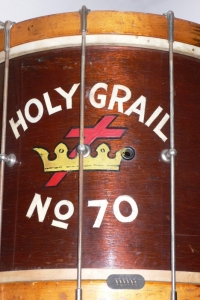 Lakewood's Holy Grail Commandery drum from many years ago. (Photo by Gary Rice)

Back when I was a Lakewood kid, one of the favorite writing assignments that teachers would roll out every fall would be having us write about what we did during the last summer. Creative writing prompts like that helped students to reactivate their imaginations after summer break. Tales of vacations, roller coaster rides, picnics, ball games, and friendships made would all come out as we scribbled our freshly sharpened no. 2 pencils onto that rough-draft theme paper during our first week of school.

Well, this is my tale of how I spent my summer this year. No, I did not get out of town once. I missed the beaches and the roller coasters too, at least the amusement park kind. The emotional roller coaster, I rode plenty though. More about that one later. Missed picnics and ball games, as well, but overall, it was probably my best summer ever.

See, I found the Holy Grail. At least I believe that I did.

Historically, the search for the Holy Grail has comprised one of the great stories in Western Civilization. Essentially, it went like this: Roughly two thousand years ago, one Jesus Christ of Nazareth was reportedly crucified on a hill outside Jerusalem. Afterwards, Joseph of Arimathea reportedly collected some of His blood in a cup that was later referred to as being the Holy Grail. That cup was considered to have been among the most priceless relics in Christendom, and the search to recover that cup has consumed kings, queens and knights for many centuries. Perhaps the most famous of those tales was the mythical Arthurian legend of Sir Lancelot's quest for that Grail.

Of course, there have been other interpretations of what the true symbolic meaning of the Grail was. Perhaps the best known recent interpretation was that the Grail's meaning implied that there was a bloodline of Jesus Christ. Interesting twists on the tale have included the theory that the other convicted man that Pilate released (Barabbas) was possibly Jesus's son. (bar-rabbi could mean "son of the rabbi") Another theory was that Jesus had a bloodline that was secretly preserved through kings and leaders of secret societies. Indeed, there are still those who relentlessly pursue the quest for the Grail, and countless books come out every few years related to this topic of endless fascination.

The original Knights Templar were a group of soldier-monks whose legends have also heavily intertwined with tales of the Grail, and these days, the Masonic Knights Templar organization continues to honor and protect the memories and traditions of traditional Christendom. As a matter of fact, Holy Grail Commandery no. 70 of Knights Templar continues to meet regularly at our Lakewood Masonic Temple. It was widely believed that many Christian treasures were deposited with the original Knights Templar, but on Friday 13, 1307, the Templars were betrayed into the hands of the French king, accused of all manner of crimes, thrown into prisons and tortured. The Templars were ultimately disbanded by the Church without a finding of collective guilt or innocence. In 1314, the Templar's last Grand Master, Jaques DeMolai (DeMolay) was burned in Paris after publicly proclaiming the innocence of the Order. Most, if not all Templar treasures were never discovered. A Templar fleet of ships also went missing, and a Templar emblem (the skull and crossed bones) later flew above pirate ships for many years afterwards. Although no direct connection can be traced to the original Order, the Masonic Knights Templar nonetheless go to great lengths to honor the spirit of the original Templars.

One of the things that the Templars, and later, Masonic organizations, would be accused of would be the "heresy of relativism". At times, there could be several holy books of different faiths present on Masonic altars. By either working with, or accepting people of different God-believing faiths, it was felt by many religious groups that the Templars and later Freemasonry, believed that one religion was as good as another. That was not true, however. Freemasonry instead, allowed a man's personal political and religious opinions to remain his own, while teaching that well meaning people could then work together for the greater good of humanity. America's Constitution and Bill of Rights both reflected that same ideal of having people put aside their religious and political differences for a greater good. America's place in the world continues to exemplify the results of this ideal.

I actually have an interpretation of my own regarding the Grail to tell about here. As I mentioned, yes indeed, I believe that I have found the Grail, and I'll present the particulars of the matter here for your own evaluation.

For the past few months, my 93 year-old dad had been seriously going downhill, health-wise. Being his sole caregiver, I was able to see first-hand what was going on. Late in July, Dad fell and hurt his foot, necessitating even more changes in his routine. Before long, his other conditions worsened, and it was back to the hospital in August. During a gut-wrenching week at Fairview Hospital, and through the aid of some magnificent doctors and nurses, Dad was given life-saving treatment, and is back home again and well on the road to recovery. That fact, of course, has been the main reason why I've had a good summer.

While at Fairview, we were helped by many people of many races and religious backgrounds, all working, very Masonic-like, for the greater good of humankind; while putting aside the particulars of what divides them in favor of that which unites them in service to humanity. No one is forced to change or hide their beliefs either. People in clerical collars work beside people in turbans, or wearing yarmulkes. People wearing head coverings stand beside others wearing Crucifixes with that central goal of helping everyone to feel better. The truly international flavor of the Cleveland Clinic Hospitals truly reflect the best that can be attained by a world of wonderful people having differences, and yet, working together for a greater good; while still retaining their individual beliefs.

But what about the Tower of Babel story in Genesis, you may ask? What happened then when people tried to work together building a tower to Heaven? According to that tale, God stopped their work and gave them different languages, forcing them to abandon the project. The Tower of Babel has been used by many groups to justify not associating with others who are not of their kind. I would submit rather that it was simply the wrong reason (trying to make a name for themselves, rather than working for God and others) that got those people in trouble back then.

On the dark night before my father's life-or-death procedure was to transpire at Fairview, Dad and I were in serious need of prayer and reflection. I went down to the Hospital Chapel, and, passing by the Chapel's office, noticed someone sitting there. I went in and discovered that he was a Catholic Chaplain  We then engaged in conversation concerning many things, and particularly, my ailing father. In a kind of joking manner, I then asked him whether he might be willing to pray for a couple of Protestant Freemasons. With a chuckle, he then carefully asked whether that might be OK with my dad? When I assured him that would be wonderful, three people from wholly different faith traditions then met in Dad's room for prayer; providing an infinite expression of Christian love in an infinitely ecumenical setting.

Dad and I cannot say enough good about that Catholic Chaplain, or Fairview Hospital, or the doctors and nurses that work in the Cleveland Clinic System. In fact, even while Dad was still in intensive care, he continued to compose music. After his release, we supplied our doctor, as well as the Cleveland Clinic, with some new songs to sing!

The other day, a friend sold me an antique drum that had been used in the now-defunct Drum and Bugle Corps of Lakewood's Holy Grail Commandery of Knights Templar. Appearing to be nearly a century old, the drum speaks well to the traditions of people who were, and are, willing to put their personal religious and political differences aside, while working together for humanity's higher purposes. Echoing Christ's message that loving God and others sums up the laws of religion, that message, at least for me, shows the REAL essence of the Holy Grail.