A Pulse Of The City Classic...November Memories 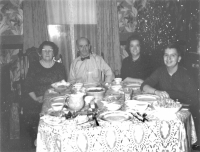 Our 1960's family Thanksgiving table, Gary not having yet dressed for dinner.

Well, it's that time again.. November...

Like a perennial tidal wave, this time keeps coming back; attempting to drown me with emotional memories. It's tough enough dealing with those chilly autumn skies, and those windy nights, and the brown and yellow leaves blowing up the driveway with their swishing sounds, and the all-too-short days, and then, there are those all-too-long nights.

Yeah, those long nights. I never realized how long a night could be.

There's a third event around this same time of course, and that's Thanksgiving. Even that normally happy and festive occasion was tempered with the sobering reality that the first Thanksgiving feast signaled the beginning of the end for many Native American peoples. For many Native Americans, or for those having a conscionable sense of history, Thanksgiving was not necessarily an occasion to be celebrated without considering what happened to Native Americans later. There was little for many contemporary Native Americans to be thankful about, except maybe, that they were still alive. There were, and still are, many families having Native American connections or sympathies who still have a difficult time resolving this holiday with those Native American tragedies that followed. My own family walked that difficult line; observing the holiday with a sense of somber awareness, but at the same time, having the determination to make the day a happy and joyous one for all who were present at our table.

The Thanksgiving holiday was a huge event in the '50's and '60's. The women worked like dogs, starting the night before, preparing the stuffing with their secret family recipes. Their floral-print aprons and their gorgeous dresses accentuated the atmosphere of snow-white linen tablecloths, set with the finest English bone china, sterling silver, and crystal. Although our family was pure middle class, the grandparents always had the linen and the silver, the crystal, and the china. Back then, these items might have been their only valuable possesions, but indeed, they had them.

Oh yes, my grandmother also embroidered her tablecloths and napkins. There were three forks and as many knives at each setting. There were fresh carrots and stuffed celery from the garden, and we each had our own salt dips for those vegetables. The meat had to be able to be cut with the fork only, or it would not be served. We always had one hand in our laps, and no elbows on the table. White shirts and ties were required for the menfolk, regardless of age. Passing the food always went from right to left, so that the heavy silver plates of food were received by strong right hands. As a lefty, I just had to make the adjustment to all this, of course. Our favorite time, as children, was naturally, eating the hand-cranked ice cream; waiting outside on the card table under the old grape arbor. The luckiest kid got to lick the paddles of the old ice cream bucket.

Before all else transpired, "The Prayer" was raised to God Almighty for His bountiful gifts. "The Prayer" was seldom long, or complex. It was, however, "The Prayer". It was the most important part of the meal. The table talk was polite and reserved. Topics that were inappropriate were ignored when brought up, or faced down with a quick and piercing look from Grandfather. All cues came from Grandfather. It's no accident either, that many Native Americans refer to Diety as "Grandfather". The connection could easily be made back then.

After dinner, the menfolk retired to the sun parlor, where pipes were lit and stories were told. The women sat around the dining room table with their own topics of interest. Occasionally the children would go out back in the woods, or up to their rooms for play.

These days, things have changed. Lots. "The Prayer", if it's even said, has become a lower-case prayer; an almost anecdotal afterthought in character. Turkeys are often purchased pre-cooked; prepared by persons unknown, and filled with who-knows what, from who-knows-where. Side dishes are microwave-zapped, served with butter-in-the-tub, and with drinks-in-the-can, along with football-on-the-tube. Aprons have gone, as have dresses, shirts and ties, as well as manners, decorum...and above all, happiness. All too often, expressions of profanity, discussions of politics, and opinionated excesses scar and profane the Thanksgiving experience, touchdown after fumble; as does an excess of alcohol. Those of you who've lived as long as I have remember the old times, and have witnessed these changes. Those of you who are too young to remember will just have to take our word for it. Not all things get better over time. Not by a long, long shot. Still, there is an important lesson that goes with all of this. The oldsters back then had just as many aches, pains, sorrows, and grieving, going on in their lives, as we have today. Or more...

These days, we like to gripe and bellyache about everything that we can think of. If we get a stubbed toe, it's off to the doctor and a dizzying variety of tests and medications. We cry, we whine, we wring our hands at nothing at all. While trying to save whales and seals and end world hunger, we forget about the anguish that's in our own backyards...or worse...we create more for ourselves. Back then, those folks around the table...those people who experienced the worst economic depression in world history...those people who survived the horrors of both World Wars One and Two...they did everything possible to make us happy.

These days, some people talk about America's, or even Lakewood's potential "decline". Some even talk about having to get by with less. Well, maybe that would not be such a bad thing, after all. Maybe we'd learn not to be such crybabies. Maybe we'd learn to roll up our sleeves and work our problems out, like they did in the old days. Maybe we'd rediscover "The Prayer" again. Maybe, just maybe, we'd try to show our children how to be happy again. That is, if we even remember how to do that for ourselves. God help us all, if we have forgotten.

The pulse of the city would then have nothing left to do, but stop.