Heroin-Opioid Deaths Pale In Comparison To Death By Medicine 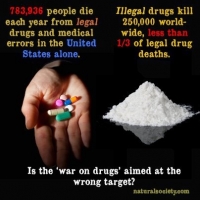 In recent months, the so-called heroin/opioid epidemic has received top billing in print media, radio, television, organized quorums, committees and legislative initiatives. The American Society of Addiction Medicine states in Opioid Addiction 2016 Facts & Figures, "Drug overdose is the leading cause of accidental death in the U.S. with 52,404 lethal drug overdoses in 2015, with the opioid addiction driving this epidemic with 20,101 overdose deaths related to prescription pain relievers and 12,990 overdose deaths related to heroin in 2015."

Shocking statistics, no doubt, however there is a much more disturbing and malingering statistic that no one seems to be talking about. Death by MEDICAL ERROR! as delivered by our country's World class health care system. According to a plethora of investigative reports, research and a mind-jarring book and documentary entitled "DEATH BY MEDICINE," one of the leading causes of death in this country is now Medical Error, which is allegedly responsible for, conservatively, just over three quarter of a million PREVENTABLE deaths each year, almost 400 times that of annual heroin/opioid overdose deaths. Just do an internet search and you'll discover the depth and breadth of this shadowy travesty. Otherwise known as iatrogenic deaths,(Deaths induced inadvertently by a physician or surgeon or by medical treatment or diagnostic procedures) they are codified in the Table Of Iatrogenic Deaths In The United States. Add to that, lethal pharmaceutical drugs (prescribed by your doctor, and used as directed) and the numbers skyrocket.

World class care? Or one-way fare to the Promised Land...

The United States health care system is the most expensive in the world, however it consistently ranks at the bottom of the list for major industrialized countries. U.S. health care spending was roughly $3.5 trillion in 2017, representing nearly 18% of our nation’s gross national product. Considering this enormous expenditure, you would think we would have the best medicine in the world; preventing or reversing disease, and doing minimal or no harm. A careful and objective review, however, shows we are doing just the opposite. Because of the extraordinarily narrow, technologically driven and profit motive context in which contemporary medicine examines the human condition, we are completely missing the larger picture. According to the CDC, as of 2012, about half of all adults—117 million people—had one or more chronic health conditions.

Conventional allotropic Western Medicine appears to dismiss or overlook the following critically important aspects of a healthy human being: (a) stress and how it adversely affects the immune system and life processes; (b) insufficient exercise; (c) excessive caloric intake; (d) highly processed and modified foods grown in denatured and chemically damaged soil; and (e) exposure to tens of thousands of environmental toxins. Instead of minimizing these disease-causing factors, we cause more illness through medical technology, diagnostic testing, overuse of medical and surgical procedures, and flagrant overuse of pharmaceutical drugs.

Sure, heroin and opioid deaths are sad, disturbing and certainly preventable, but I think it's time to wake up and take a look at the BIG picture.

Briefly... I am a progressive independent thinker with an abstract slant: /-left of center-\ (not a flaming alt-left liberal snowflake). Purveyor of opportunities and happenstance that often result in the exploitation of unexpected juxtapositions. ie; a synchronistic opportunist (risk arbitrageur). Also an incidental pet psychic, beat poet, reader of Poe, et al, a novel novelist, new 52centurion, an old world visionary.