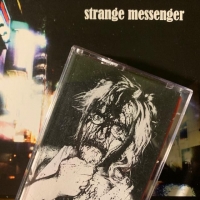 This is a new band featuring members of Basement Boys, Weed Whacker, possibly Spike Pit, and probably several others. You know how these things go. There aren't any tracks listed on here (I hope I got the count right– if there are more or less than six, you're more than welcome to send me hate mail, but only if you're a member of the band). Rat Fucker play pretty good hardcore. It took a couple songs for me to get into it, but by song three or so I was digging it. It's a lively performance (I wish I'd been there, but I'm a poser) and the recording is pretty good, things are nice and clear. There are some good guitar leads throughout, the bass is loud and crunchy in the mix. There's not quite as much live banter as I'd prefer, but what's on there isn't bad, particularly the "we'll do better next time" after the last song. A bit more Noncommercial Records than Mirror Records, just a heads up. Pretty good. 3.5/5

(listen at youtu.be/vwbDCh-me7Y– I think you'll have to see the band if you want the tape)

Strange Messenger is a new band led by Rae Martello, who I believe played with both The Heathers and The Vivians. This should please fans of both; it's in the same general vicinity, or somewhere between those two, or something like that. That kind of alternative rock/punk mix, ya know? "Trapped" even trespasses into metal territory. They cover the Vivians' song "The Smoker" on here, and while I don't know that I'll be reaching for this over the Vivians, it's not bad stuff. The songs themselves are all alright, but there's just something slightly off for me. It all sounds very restrained. At first I was trying to figure out whether they were playing to a click track or something and whether that was it, but I think it's just the sound of the actual recordings. The thing is so compressed that nothing ever really "pops"– there's no dynamics. I don't know who should be blamed for this. I'm tempted to say the person who mastered it, but someone who knows more about audio stuff than I do should probably be the one to point fingers. Consult your physician. All the same, there's some decent stuff on here and if you're willing to look past the compression issue or whatever it is, it's not bad. 3.5/5

Are you a local-ish band? Do you have a record out? Email vaguelythreatening@gmail.com or send it directly to Observer headquarters: The Lakewood Observer, c/o Buzz Kompier, 14900 Detroit Avenue, Suite 205, Lakewood, OH 44107.