The Rockport Miracles-Part 4: Episode 18: The Ballad Of Derecho Dan Continues 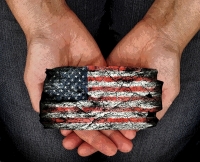 Maynard Gridley’s funeral was a pip. Many of his neighbors in Parma, Ohio - the same people who had shunned Maynard out of fear and mistrust, were startled to witness the legions of Maynard’s friends that overwhelmed St. Christina - The Astonishing Catholic Church. Hundreds had come to pay their respects, including Maynard’s ragtag Vietnam veteran buddies, Color Guard members representing three regional V.F.W. Posts, and police officers who’d once had the pleasure of arresting Maynard. The roar and pop of Harley-Davidson engines outside the church announced the arrivals of motorcycle clubs from all over the midwest. They all came because they all loved Maynard.

His mother, Rowena Gridley, wanted everyone who had come to the funeral, to leave with a well-rounded appreciation of “the Maynard.” For example, it was a surprise to many that Maynard had been the recipient of a Silver Star for gallantry in Vietnam. Rowena couldn't have known that during the course of telling her favorite Maynard tales to the crowd, she'd inadvertently exposed a few old grudges still simmering among many in attendance. When a fight erupted between groups of bikers and Vietnam vets, a gaggle of nuns and Color Guardsmen rushed in to break it up.

The fracas came to a screeching halt after the flag-bearer from V.F.W. Post #69 was knocked to the ground. He was unhurt but ‘Old Glory’ fell to the floor where it became snagged and torn on someone’s spurs. The fighting stopped immediately and the aggrieved parties shouted out the cost of damages. Without an argument, payment in full was agreed to by the guilty parties. Everybody was really very very sorry.

Then, an older policeman stepped forward. He removed his policeman’s cap and gave a speech about the time he’d stormed the beach at Iwo Jima. With gut cleansing detail, he reminisced on the carnage associated with that famous battle and what it felt like to witness the American Flag being planted on Mt. Suribachi. No, he clarified, not the famously photographed flag raising (which he revealed to the mourners as “totally phony”). He was talking about Captain Kit Kadolewski from Butte, Montana who owned a 4’’x6” American Flag that his mother gave him right before he shipped out. Once his squad had reached the top of the defunct volcano, Ol’ Capt. Kit yanked that flag off his cartridge belt and palm-slapped it on Suribachi’s summit BEFORE any and all other flags. That’s TRUTH! The cop further confided that as far as anyone knows, Kadolewski’s flag is still there on Suribachi’s summit “under a heart-shaped rock.”

There wasn’t a dry eye in the house after that. The most hardened biker hombres in attendance went to absolute pieces. Before long, the bikers were hugging the Vietnam Vets and the Vietnam Vets were hugging them back. Precisely at that moment, the voice of Rowena Gridley rang through the church, “QUIET EVERYONE! QUIET! LISTEN TO WHAT I HAVE TO SAY!!” Everyone went silent enough to hear a pin drop as they gave Rowena their full attention. “I know some of you will find this hard to believe,” a wistful Rowena said from the pulpit, “but, all of this corned beef conflict…and cole-slaw passion…I, mean…this is just SO Maynard.”

Unnoticed in all the chaos was a forlorn Tom Graber, Rockport’s Chief of Police. He’d attended the funeral hoping to meet up with his #1 fugitive from justice, Little Dan Newman. Chief Graber had to admit that he’d underestimated Little Dan by expecting him to resurface on his own. By the day of the funeral, there was still no sign of Little Dan and Graber was in hot water because of it.

Chief Graber had also underestimated the three Joes. After all, it was they who’d facilitated Little Dan’s escape out of Rockport. They were moving Little Dan out of Little Italy to a new location as Maynard Gridley’s funeral was underway. Only Rowena knew where they'd taken him.

It had all been planned the day before, after Little Dan had finally come to his senses in a Little Italy basement. He'd told Rowena about a dream he had. During that dream, Maynard’s spirit had appeared to Little Dan and taken him for a ride on a mysterious boat. Then, Maynard gave him a “mission” without telling him what it was. It was up to Little Dan to figure out what that mission was.

Rowena knew her boy, Maynard, like no other. She believed Little Dan’s dream was a legitimate Maynard message sent from the “other side.” With Little Dan and the three Joes huddled around her in the basement, Rowena yanked a AAA map of Cleveland out of her purse. She splayed the map across a table and began searching locations on it with her finger. When her finger stopped over a specific area she marked the spot with a splat of tuna fish salad borrowed from Little Dan’s sandwich. The spot marked an industrial area along the Cuyahoga River.

“Maynard wants you to go HERE,” she said, “and...we're not going to disappoint him!”