The Rockport Miracles-Part 4: Episode 26: The Ballad Of Derecho Dan Continues: 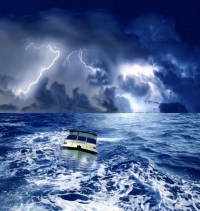 The mood was festive along the lakeshore cliffs that define the northeastern border of River City.

On the day that Little Dan became legendary, it seemed as though the entire population of River City showed up to watch Storm 5.6.

The extraordinarily high population of orthodontists living in River City took full advantage of the moment. Dozens of them had shown up to conjure new business for themselves.

Many were seen gripping the buccal and lingual halves of childrens’ mouths as they explained the pertinent benefits of even chewing.

Below the cliffs, on the water, sat the River City Yacht Club where the ultra-elite lounged lazily on the decks of their majestic boats, drinking pina-coladas and discussing the price of rice.

These laissez-faire behaviors were made possible by two things: The first being the uncanny predictability of the derecho winds that bedeviled the town of Rockport. Even though the intensities of the storms had varied, the trajectories were constant.

A bird’s eye view of the town revealed that the straight line storms always landed ashore at what was once Rockport Park and over time had cut a deep, mile wide furrow straight through the middle of town.

It had been this predictability that allowed the smarms and swells of River City to lounge and laze all too pleasantly and be entertained at the expense of Rockport’s misery.

The other thing that made the freak show possible was the mayor of River City, a slimey gunk-herder and real estate developer named Bart Ridgewood.

Early on, Ridgewood had recognized the potential of the storm watching phenomena and lined the viewpoints with picnic tables, park benches and bar-b-cue grills.

Ridgewood and his rich cronies had created the new housing development that sat adjacent to this viewing area. In accordance with River City’s manic obsession with all things boating, the development was called, the Erie Water Wave Estates.

They were built with the intention of luring storm battered Rockporters to the calmer shores of River City. It was, in fact, a ruthless plan intended to hasten Rockport’s economic collapse and line Ridgwood’s pockets with money.

Created from an ambitious development plan, the ‘EWWE’ was a tangle of twisty and over landscaped streets that featured nautical names like, “Ahoy Avenue”, “Bilge Blvd.” and “Crappie Lane”.

Worse yet were the houses themselves. Each one had a typical foundation footprint but the upper stories of every home were shaped like different kinds of boats. There were schooners, clippers, and even tugboats.

Topping off the roofs of these ridiculous ideas were gaudy looking Widow’s Walks. The stated purposes of these high perches, in Ridgewood’s own words, “were to provide the Captain of each home an escape from his family in order to survey the broad horizons of Lake Erie in peace and quiet.” (What an asshole).

Ridgewood, a consummate politician, was present that day and had been busy working the crowd. He shook hands and kibbutzed with several River City types that loved listening to the sound of their own voices and the rustle of their chinos.

Then, with typical grandiosity, Ridgewood announced that he would ‘retire’ to the Widow’s Walk atop Model Home “A” in the EWWE to observe the storm in his official capacity and “breathe in the clean air of freedom.” (What an asshole).

Ridgewood was still on his way to his perch in the EWWE when a River Citian saw a strange sight though his binoculars and screamed, “LOOK! OUT ON THE LAKE!”

Hundreds of onlookers spun around and gazed in wonderment at the sight of a small cabin cruiser that came out of nowhere and had poised itself directly in the path of the oncoming derecho.

“WHO IS THAT?” people cried out. “WHO’S IN THAT BOAT?” others screamed. “HE’S A DEAD MAN!!” yelped the optimist in the crowd.

It was, of course, Little Dan Newman. He’d steered a 33’ foot Chris Craft known as, “The Friggin’ A” out onto Lake Erie to confront the oncoming storm.

The boat savvy people of River City were quick to notice that the cabin cruiser hung very low in the water. Many surmised that the boat had sprung a leak. None of the observers could’ve known that the vessel was packed to its gizzards with explosives.

Though his body, mind and soul had been shanghai’d by the LSD that he’d unwittingly swallowed, Little Dan still knew what he had to do. The Rockport storms had ruined his life. They’d destroyed his family, his happy home, and his livelihood. Now, the tables had turned and it was he who held the instrument of doom.

He shook his fist at the multi-colored sky one last time and gathered up all the courage his astral plane could shed. There’d be no turning back.

Little Dan Newman III from Rockport, Ohio, in honor of his parents, his dog, the Gas & Lube, and all that is good in the God-forsaken, cockamamie world was ready to create his own very special Rockport Miracle.

He left all fear
In his wake
And shed a tear
Into the lake
He had a plan
That’s for sure
First the disease
And now the cure!

Derecho Dan
Oh Derecho Dan
You can break the wind
Like nobody can
That storm would soon
Exact its toll
Don’t let its clouds
Take away your soul!