When Will They Learn: Reviews Of Recent Releases By Local Bands, Pt. 107 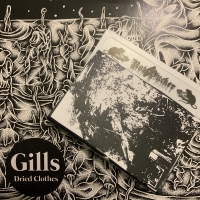 I don't know anything about this band other than I've seen their name on shows for a couple years and they're from Youngstown, I'm pretty sure. This record is a really good hardcore record. Nice garagey production and pretty straightforward, no frills stuff. There's a bit of the Cruelster sound here, though less weird both musically and lyrically. The singer kinda reminds me of the guy from Fried Egg. There's a part on "Bird Rage" where I'm not certain whether the drummer skips a couple beats for dramatic effect…or he just missed the beats. Dropped a stick or something? Either way, it sounds cool. "TUFF/M.B.T" reminds me of a Cider song, though I cannot quite remember which one. The no frills thing carries over to the packaging here: hand-stamped labels, not even a full folded cover, hardly any information about the band or anything. Maybe it's all best left a mystery. One other thing definitely done right by Gills here: Nathan Ward cover artwork (another thing in common with Fried Egg, now that I think about it). Worth seeking out. 4/5

Here's the first studio release from Rat Fucker, following up on their live tape from last year. I guess this one is a cassette "for now" with plans of pressing it as a 7" at some point in the future. It's pretty ripping hardcore. I can't quite remember what other bands these guys are in– Spike Pit and Weed Whacker are at least two of them, I'm pretty sure. It's good stuff. Topic-wise, this is a serious band (there's good messages here about the environment, distribution of wealth, and inclusiveness, if you can believe all that from a band called Rat Fucker), but vocalist/lyricist Kellar presents the songs in a cartoonish enough way (and I mean this as a compliment– I saw someone say this band is wrestling-themed, which is not at all the case as far as I know, but they do have that kind of energy) that they're not overly serious to the point of being boring. Overly serious bands don't have lines like "destruct is dumb." And the band rips, too. Check out the bass lead that pops up throughout "CCCCP." Or the drum break at the end of "Fist Of The North Shore." Or any of the slightly ridiculous but simultaneously awesome guitar solos throughout this thing. On "Cosmic Fire" they're all really on fire…no pun intended. The only complaint I'd have is that a lot of the lyrical flows, metrically speaking, are kinda the same. But hey, even if it does all sound the same, at least it sounds pretty cool. I'd buy it as a 7". 3.5/5

Are you a local-ish band? Do you have a record out? Email vaguelythreatening@gmail.com or send it directly to the Observer: PO Box 770203, Lakewood, OH 44107.